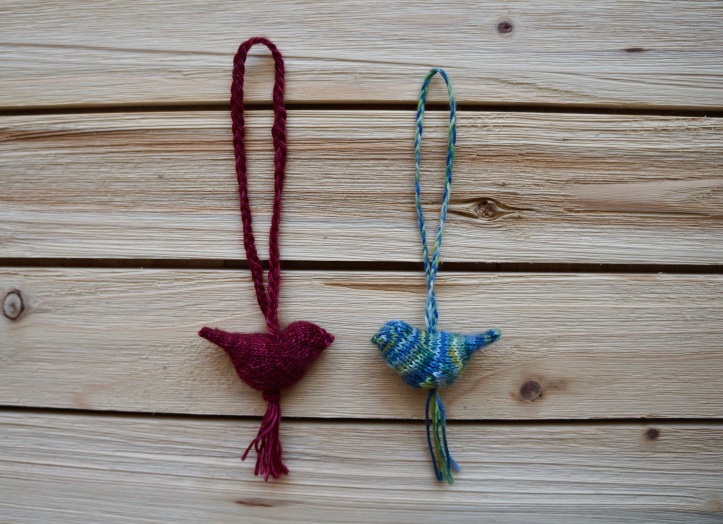 The blue bird on the right (made with The Dye Project Montara sock in the Blue Tartan colorway leftover from a pair of socks) is the first one I made, and I have it hanging in my living room. The red bird is made with Madelinetosh Praire in the Poison colorway (I think) from a shawl that I gave as a gift a few years ago. I sent that bird in a package to my mom. I love how chubby they are! For the ties, I just braided some of the yarn and threaded it through in a loop then tied a knot at the bottom to make the tassel.

I also made some lavender stuffed hearts for some swap packages I sent off (my first ever!). I used the heart pattern from the Gnome is Where the Heart Is collection by Susan Claudino. I used a 2mm (US size 0) needle to makes these as well. 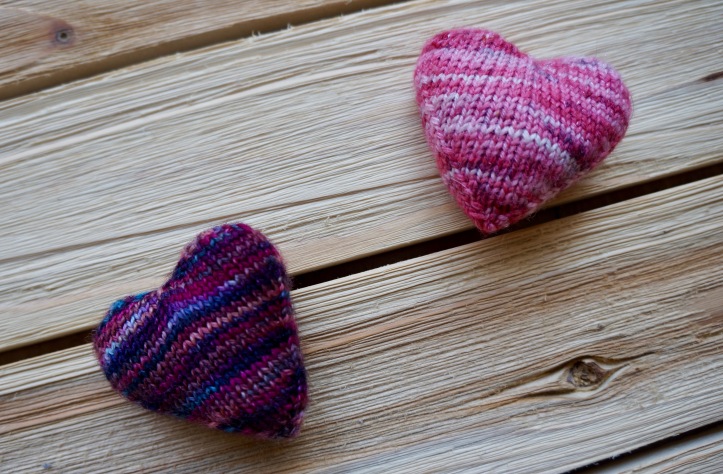 These hearts are both made from sock scraps. The pink one is a glitter sock yarn by Mockingbird Moon leftover from my Christmas socks last year. The darker heart is made of Manos del Uruguay Alegria in the Tannat colorway from my Valentine’s Day socks. This heart pattern is so easy, and the hearts are so adorably tiny.

I also like to make cards with crochet appliqués occasionally, and I made a few recently. The yarn I’m using is some lace that I bought in London a very long time ago, and I don’t really know what else to make with it. I have no idea what it is. 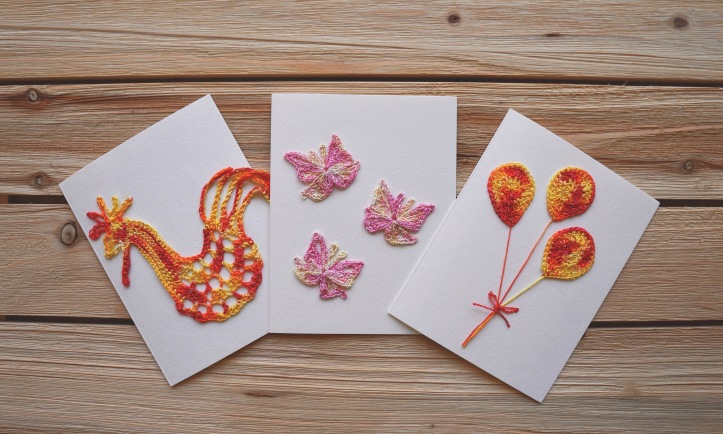 I usually kind of just look at Ravelry for free patterns or ideas for appliqués. The rooster card is mostly using this free pattern, but I stopped before the tail section and kind of improvised a tail. For the butterflies, I took inspiration from this butterfly stitch tutorial. I started with this free pattern for the balloons, but I added a single crochet border, and I just used the tail as the string.

I’d really like to make a garland for my room soon! I’m not sure if I’d want to use the stuffed hearts, simple triangle bunting like this or this, or maybe even pom-poms. I know that the Wool, Needles, Hands podcast is hosting a garland make-a-long later this year, so maybe I’ll join in on that.

I’m traveling in Europe right now (Ireland and then Denmark), so expect some posts about yarn adventures soon!