I’m moving to a new place in a few weeks, and I’ve been trying to organize my belongings in the process of packing. In addition to finding a lot of stuff that I don’t really need or use, I had a few unfinished knitting and crocheting projects that I hadn’t looked at in a very long time. I know that many crafters (and people in general) have at least one of those upsetting, incomplete projects that we started with such hope, only to lose interest, stop loving the project, or make a difficult-to-fix mistake. In my packing, I found 4 of these unfinished objects, so I wanted to talk a little about how I dealt with them.

Last year, I finished a block-a-month crochet afghan as the first full size afghan I’ve made. However, I’ve kept two partially finished crochet afghans on a shelf in my room for several years now. One of them was a project I started in 2014. I wanted to use yarn scraps to make a sort of block-a-day blanket: each day, I’d make a small, puffy, crochet hexagon, and, at the end of the year, I’d have a full sized blanket and have used up lots of yarn scraps in the process. I quickly got behind, and the amount of sewing required to put all of the hexagons together was pretty daunting.

I definitely love this project, though! It’s so colorful and fun. Looking at it made me want to start it up again, and I’ve collected so many more yarn scraps since I last worked on it. This is an example of an abandoned project where picking it up again really made me want the finished object and made me want to work on it immediately!

My other afghan is less of a happy story. I loved the pictures I saw of colorful bobble blankets, and I wanted to make one. I can’t remember the exact pattern I used, but I think it was very similar to this one. Bobbles just take a really, really long time. I used some jewel-toned yarn from Red Heart, and I think the super saturated colors and acrylic yarn also made me get tired of the project. 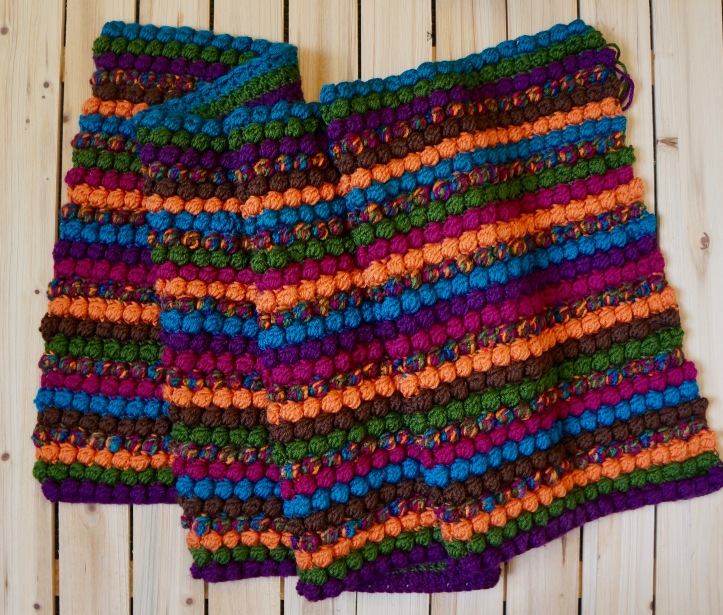 So, when I picked up this projected again, I just decided to move on. I’m donating the remaining balls of yarn that I had left over, and I gave the unfinished blanket to Goodwill (I don’t think anyone would want it, but I couldn’t bear to throw it away myself). It did make me feel sad that I had put so much effort into the project at some point just to give up, but it also felt good to step away and not have the project staring at me from my shelf anymore.

The other two projects I found were garments that I had started when I was very new to knitting. I ended up frogging both of them, but I kept the yarn. One of them was my very first attempted garment knit – Sherry, by Kim Hargreaves. 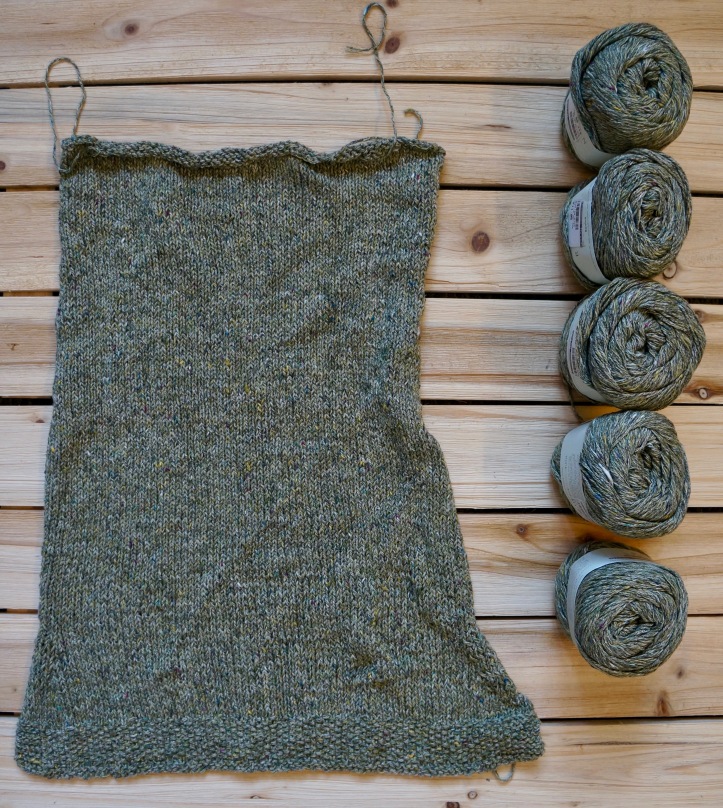 I learned a lot from the single front panel that I made of this project, but I was so new to knitting that there are several mistakes, and my gauge isn’t very consistent. I’m not sure why I chose this as my first project – using this Rowan Purelife yarn that’s partly cotton didn’t make the knitting very easy, and, honestly, I’m not a fan of short sleeved cardigans in the first place. The project has just been sitting around begging me to rip it out, so I’m very happy that I finally did. I’ll probably eventually make something else with the yarn, which is in the Granite colorway.

The second garment was maybe the first garment I cast on that I was super excited about. I tried on the Sandy top at the Habu booth at Stitches West in 2016, and I fell in love with it. I just love how weird it is. I bought enough of the silk wrapped merino yarn to knit the garment, and I cast it on. The yarn is a light fingering or lace weight, and the pattern calls for 4mm needles, so gauge was very important to make it look even. Additionally, the pattern is very minimal, so it wasn’t great for a beginner knitter.

I ripped out what I had knit so far (which was the waist band and part of the front), but I think I might cast it on again. I do like the finished object, and I think I’m experienced enough now to be able to execute it correctly. I’ll think about it for a bit and see if I can come up with anything else that I might want the yarn for.

So, now, I’m officially actively working on all of the projects that I have on the needles/hooks! It feels great. I hope I can be a little more diligent in the future about not abandoning projects that I’m not happy with for too long. What projects do you have that need a little attention?