This past weekend, I attended Stitches West. I’ve been going to Stitches for the past 3 years since it’s held in Santa Clara, CA, really close to where I live. The first year I attended, I only went for the marketplace, which is super amazing. Last year, I took a class for the first time, and it was such an amazing experience that I decided to take another class this year. I’ve been wanting to do more colorwork knitting, and I’ve also been wanting to do some intarsia so that I can make a plaid scarf or shawl. I chose the class Color Play taught by Jill Bigelow-Suttell which focused on combining intarsia and fair isle knitting in the flat. I was really just hoping to learn a little bit about intarsia and to learn how to do fair isle holding the two colors in both hands instead of in one hand as I’ve done in previous colorwork projects. But I actually learned SO MUCH MORE.

I tried to take pictures of my sample piece during the class so that I could show my progress. First, we practiced knitting with our non-dominate hand. I knit continental style, so I hold the yarn in my left hand. I had never, ever tried holding the yarn in my right hand before this class, so it definitely felt really weird in the beginning. Next, we learned knitting from right to left – which is honestly something I had never considered as an option before. I’ve knit one thing that involved colorwork in the flat, and I just continued to do the colorwork while purling across, which, yeah, was pretty tough, but I didn’t know there were other options. So, in just the first few rows of my sample piece, I’d attempted knitting with my non-dominant hand in the normal direction (from left to right), and I’d also attempted knitting BACKWARDS (from right to left) with both hands. Even at this point, which was maybe half an hour into the class, my mind was blown.

Next, we started the fair isle colorwork. For this, we held one yarn in each hand and always kept the front of the work facing us, so knitting left to right and then right to left. It was definitely not easy. Jill recommended practicing these techniques for about 20 minutes a day to build muscle memory and get the tension right. For the purposes of the class, we jumped right into techniques for carrying the yarn across larger patches of one color and switching colors mid row. Finally, we did some intarsia. I’m not sure I even really knew what intarsia was before this class, but I learned that it’s basically changing colors mid row but then not carrying the colors along for the entire row. At first, I was not very smooth at this, especially when combined with the fair isle, but I think by the end I was actually doing okay.

I really loved learning all the new things in this class, and it’s just so fun to get to hang out, struggle, and bond with all of the other people in the class. At the end, we all had beautiful, very different sample pieces to go home with. I’m thinking of casting on the Kodikas shawl from Boyland Knitworks to practice some of these techniques. It’s a fair isle shawl knit in the flat with a bunch of stockinette sections, so perfect for practicing knitting backward and two-handed colorwork.

I also (obviously) spent a bit of time at the Stitches marketplace. I’ve really been wanting to make a Find Your Fade shawl, so I mostly focused on picking up yarn for that project. It was super difficult and overwhelming to get started and choose colors, but I’m really happy with the fade I found! 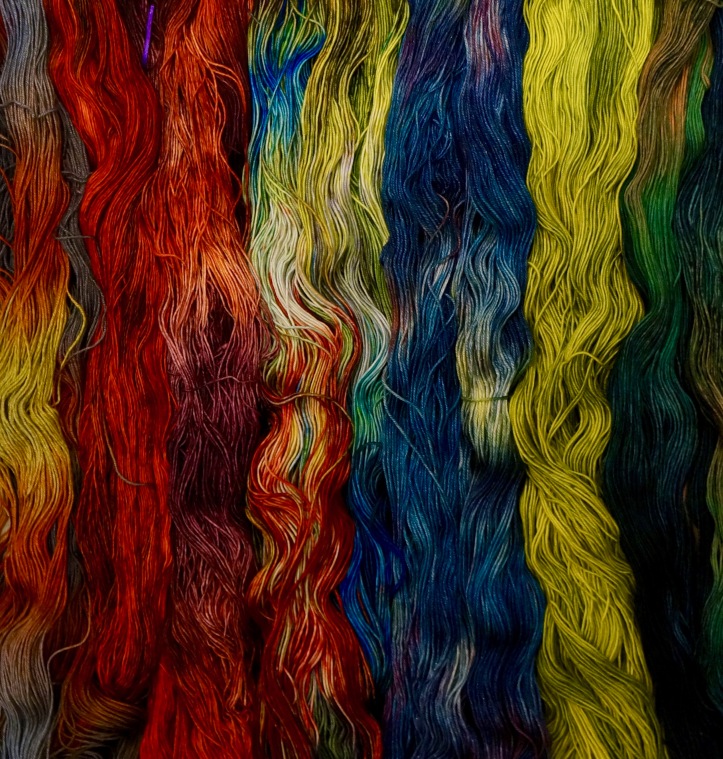 The yarns are (from left to right):

I also got 2 other yarns for no reason other than that I thought they went perfectly together – WalkCollection Cozy Merino in colorways Adele (left) and Ali Baba (right). Maybe they’ll be a shawl someday?

Anyways, Stitches West was awesome, I totally recommend going to any knitting event and taking classes and buying all the yarn!