I mentioned in one of my recent posts that I finished the Desert Star Top I cast on in mid-July, but I only had the chance to get it photographed today. I’ve actually already worn it several times because I like it so much!

One of my best friends gifted me the yarn I used for this top for my birthday this year. It’s Blue Sky Fibers Worsted Cotton in the Sleet colorway. I used smaller needles than the pattern recommends – 3.25 mm for the edging and 3.5 mm for the rest instead of 3.75 mm and 4.5 mm. I very nearly ran out of yarn towards the end, but I just did one fewer row for the neck edging, and it looks fine. I used 5 skeins of the yarn.

I was initially drawn to the top (which is a free pattern by Berroco) because of the unique construction. The back is one large rectangle, and the front is a much smaller rectangle with neck shaping.

Since it’s sleeveless and because I used a cotton yarn, this piece works well for the insanely hot end of summer that we’ve been having in California. I think it will also be great for fall if I layer it over a long-sleeved shirt. 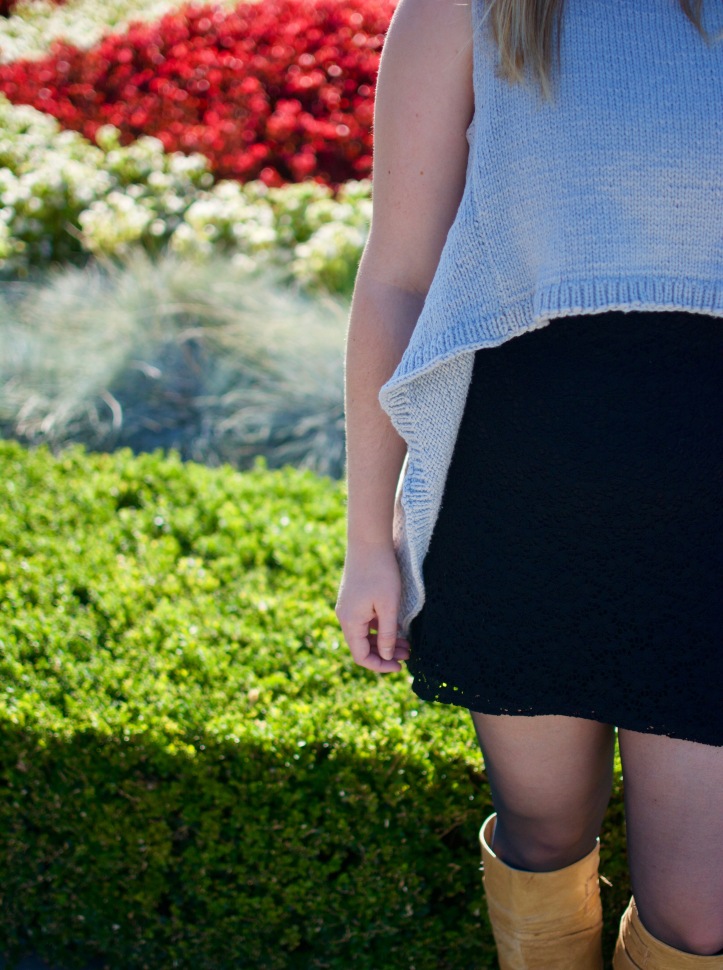 In other news, I finished my first pair of socks ever today! I’m hoping to photograph them sometime this week so that I can submit them to my local yarn store’s Finish it for Fall drawing. I just finished the bust increases on my Vaara t-shirt, and I’m really happy with it so far. I also really need to get to work on my September Block-A-Month afghan squares… So much knitting in my future!